Brass instruments fascinate me. The interplay of human natural and artificial structures is complicated, physically and mathematically unwieldy, and altogether unusual and beautiful. The fact that the tissues of the lips provide the basic oscillation for this instrument is at the heart of my fascination.

The original modern model of the lips is that of Helmholtz, from the masterwork On the Sensation of Tone (1877).  His idea was that the lips were like a valve for a one-dimensional flow of air.  This lip valve was controlled by pressures, upstream in the mouth, downstream in the mouthpiece outside the lips, and now we might also add between the lips (like a “Bernoulli” pressure – moving air exerts less pressure).   These valves could be categorized and analyzed depending on the action of the valve under various overpressure/underpressure situations.  An “outward-striking” valve would tend to open when there was greater pressure upstream and less pressure downstream.  The “lip reed” of a brass instrument may be seen in this way: when there’s more pressure inside the mouth than outside, the lips can blow open.  Alternatively, an “inward-striking” valve would tend to close in that situation, and open when there’s greater pressure downstream than upstream.

Current thinking and the state of the art model

While still working on a model of the lip reed

The input impedance is defined as the ratio of the pressure to the volume velocity at the input to the mouthpiece.  In everyday terms, this is the relationship between the “push” or acoustic effort (pressure) and the result of that effort, the amplitude of the flow (volume velocity quantifies the oscillating volume of air).  For a brass instrument, this ratio is quite useful for understanding the behavior of the instrument – playability, intonation, and so on.  My work in understanding the oscillations of the player’s lips relied on input impedance to characterize the instrument’s effect on the lip.  The aerodynamic forces that regulate lip motion and cause a periodic, musical tone are dependent on a well-designed instrument.  Most simply, the reflections of sound energy that return to the mouthpiece to exert pressure on the lip need to be well-timed to coincide with the period of the lip oscillation.  Put together, a well-regulated lip oscillation and well-timed pressure waves to perform that regulation create a musical tone at the intended frequency.  This occurs at the resonances of the instrument, as determined by the length and cross-section design of the pipe.  (There is much more about this in an excellent Introduction to the Acoustics of Brass Instruments, written by Joe Wolfe of the University of New South Wales.)  This also happens to occur at the peaks of the input impedance function.  At those peaks, the instrument can exert quite a bit of pressure on the lips for a given supply of volume velocity.  This nice, healthy pressure ensures that the oscillation of the lips is timed to coincide with the standing wave of the instrument, and a solid note can be sounded.  Obviously,  understanding the input impedance for a particular instrument can be very important in creating a good design.  Two fine articles explain more about the input impedance of brass instruments: one for a wide audience by Arthur Benade [Benade, “The Physics of Brasses.” Scientific American, July 24-35 (1973)] , and the other, more technical study Journal of the Acoustical Society of America [Causse, et al., “Input impedance of brass musical instruments – Comparison between experiment and numerical models.” J. Acoust. Soc. Am., 75, 241-254 (1984)].

Piezoelectric driver: One of the first projects of a general nature is the assembly of an impedance head.  The original idea sprang from a description by Arthur Benade [Benade and Ibisi, “Survey of impedance methods and a new piezo-disk-driven impedance head for air column.” J. Acoust. Soc. Am., 81, 1152-1167 (1987).]  Begun in the Summer term of 2003 as an independent study with Tim Swieter and continued by Chidi Uhiara in Winter 2004, this project developed and built several inexpensive versions using a piezoelectric driver and electret microphone.  After one term with Tim, we had our first impedance head, built for the dimensions of a trombone mouthpiece.  Chidi refined the design somewhat, and began developing a calibration process and function to improve the precision of the device.

Microflown device: The Microflown is a particle velocity sensor based on a MEMS device that measures temperature differential between two tiny wires.  Combined with a very small precision microphone in a package the size of a match head, we can measure the input impedance almost directly (one only needs to convert particle velocity to volume velocity with a known cross-sectional area.  The device is part of a system designed and built in the Acoustics Lab at Kettering University to make input impedance measurements in a straightforward and direct way.  The project is made possible through a partnership between Kettering and Microflown Technologies.

The Kalimba is a type of mbira made by Hugh Tracey in South Africa.  The mbira (one of the group of instruments casually and generically called a “thumb piano”) is an ancient instrument of the Shona people of what is now Zimbabwe.  Its popularity reaches across Africa, and around the world — in traditional repertoire, amateur and recreational use, and in contemporary, pop and Western-tuned compositions.  The acoustics of the kalimba come from two main structural features, the metal keys and the wooden resonator box or plate.  A thorough investigation of the instrument, with the help of an independent study student, William Rein, has yielded some understanding of these structures.  Experimental modal analysis of the resonator box, laser vibration measurements of the keys, acoustic transfer function measurements of the box cavity, and modeling of the keys all tell the story written centuries ago by inventors in central Africa.

The Djembe (pronounced, and alternatively spelled Jembe or JEM-bay) is a drum that originated in West Africa.  Traditional forms of the instrument have a goblet-shaped shell carved from a single piece of hardwood, over which is stretched a specially-prepared goatskin.  Tension in the skin is maintained by a system of rope laced around iron loops which sit at the top and middle of the shell.  Web resources for more about the djembe detail playing techniques, instrument care, and the social aspects of the drum (dance and drum circles) abound.

In the Kettering Acoustics Lab, Dr. Russell and several students have studied the generation of the bass, tone, and slap sounds produced by the djembe.  My interest is to model the three acoustic parts of the drum using multiphysics/finite element software, and try to understand better how they work together: the membrane, the air cavity, and the shell.  Comparison of experimental modal tests in the lab with results of eigenvalue analysis in the model are looking promising, but much more work needs to be done!  Ultimately, we would like to inform the tuning/skin tightening process and the playing techniques to achieve distinctive bass, tone, and slap sounds by understanding the physics of the instrument.

The middle of the 20th century saw a blossoming of new electrified musical instruments.  Many of these were modified versions of traditional “acoustic” or non-electric instruments; the electric guitar is a dominant example.  Designs for portable electric pianos were also popular.  Among these the Rhodes keyboard and the Wurlitzer were perhaps the most commercially successful.  Both electric pianos used tuned metal rods or bars instead of strings, eliminating the need for a strong soundboard or frame to support string tension.  The metal rods were struck by hammers, much like piano strings are  struck, but the bars produce very little sound output.  A piano soundboard transmits string vibration into the air through its large surface area.  Electric pickups and amplifiers did the job of the piano soundboard; the bars’ vibration is sensed, amplified, and coupled to an acoustic wave through a speaker.

The resonances of the bars are responsible, in part, for the tone of the electric piano.  A group of students in Acoustics II: Sound and Vibration (Physics 482) investigated the vibration characteristics of the bars to see how they compare to ideal bars according to Bernoulli-Euler beam bending theory.

Critical Bands demo for “Introduction to Acoustics” by Daniel Russell 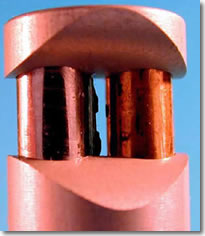 The Microflown sensor is mounted inside this 1/2″ probe, along with a precision microphone.