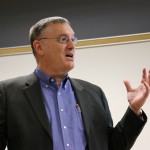 Scores of people were welcomed to Kettering University on Wednesday, February 3rd to participate in Kettering University’s Town Hall event. This event allowed students, faculty and members of the Flint and Kettering communities to learn more about activity on campus and the future of Kettering through the Master Plan.

Recently, I had the opportunity to speak with Professor Kenneth Williams and Professor Karen Cayo, Advisors of the Kettering University’s DECA (Distributed Education Clubs of America) team, which competed in the 2016 State of Michigan Career Development Conference, and placed exceptionally well. The team managed to take home 19 awards, five or which were first place, another five in second place, three in third place, and six honorable mentions, which ranged between fourth and eighth place.

Pop Evil at The Shop x3

The local hard rock venue, The Machine Shop, came to life for three sold out shows in a row earlier this year. Pop Evil stopped by Flint touring their new album “UP” and put on a legendary show. For the 15 plus years The Shop has been hosting rock bands, Pop Evil was the first to sell out shows on three consecutive nights. The band members are Michigan natives from Grand Rapids, so their are excited to be back in their home state while touring.