The meeting will feature four exciting plenary invited talks from the following speakers:

Semiconductor nanowires have recently emerged as a new class of materials with significant potential for new fundamental physics and for new applications in device physics.  Semiconductor nanowires are prototypical quasi one dimensional materials that come in many forms from singular materials to complex heterostructures. These materials can now be grown with high crystal quality and thus explored for their intrinsic physics.  We will present recent results exploring the properties of GaAs/GaAlAs core-shell nanowires, the role of symmetry in InP nanowires, and a unique heterostructure called a quantum well tube. We bring to bear a variety of optical techniques to advance our understanding of these structures.  We introduce a new optical technique, transient Rayleigh scattering,that is shown to provide unique insights into the photoexcited carrier dynamics in nanowires.  Finally, we show some very preliminary results that indicate this technique may have powerful capabilities to characterize a wide array of less studied materials with band gaps well into the near to mid IR energy region.

This research may have strong societal impacts because of the potential for designing high-efficiency solar cells, for reducing dependence on fossil fuels, and significantly impacting nanowire electronics and nanowire-based chemical or biological sensors.

Dr. Howard E. Jackson received the B.S. degree in physics from the University of Rochester, Rochester, NY in 1965 and the Ph.D. degree in physics from Northwestern University, Evanston, IL in 1971. He was associated with McMaster University and the University of Toronto, Toronto, ON, Canada. He has been a Visiting Scientist at the Clarendon Laboratory, Oxford University, Oxford, U.K., and the University of Southampton, Southampton, U.K. He also served as the Council of Graduate Schools/National Science Foundation Dean-in-Residence in Washington, DC. He recently retired as Professor of Physics and Distinguished Teaching Professor at the University of Cincinnati, Cincinnati, OH, where he has served as both Vice President of Research and as University Dean of the Graduate School. His active research centers on photonic crystal structures and light scattering from self-assembled quantum dots and semiconductor nanowires. Dr. Jackson is a Fellow of the American Physical Society and the 2012 recipient of the OSAPS William Fowler award. 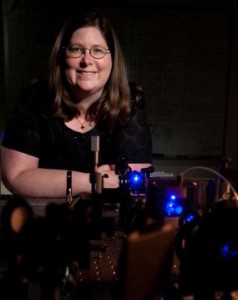 Many neurodegenerative diseases, such as Parkinson’s and Alzheimer’s, are caused by uncontrolled aggregation of proteins. While many aggregation-prone proteins ultimately form fibrillary structures, evidence suggests that early, unstructured aggregates are toxic to neurons. The complexity and dynamics of unfolded protein ensembles may be the ultimate speed limit of folding and play a crucial role in aggregation. In my lab over the past several years, we have investigated the reconfiguration

Lisa Lapidus studied atomic physics at Harvard University with Gerald Gabrielse, earning her PhD in 1998.  After grad school, she tried something completely different, doing a postdocs at the National Institutes of Health with Bill Eaton at Stanford University with Steven Chu to study protein folding and single molecule methods.  Since 2004, her lab at  Michigan State University has studied protein folding and aggregation using optical spectroscopy, single molecule and microfluidic techniques. 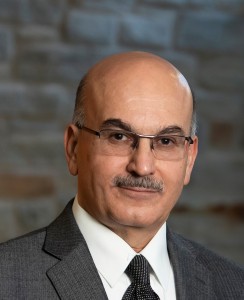 The unique characteristics of Physics graduates including depth of scientific knowledge and breadth of technical skills may be the necessary but not the sufficient factor for career success. The dichotomy of physics is having some physicists as social icons, but not enough students as physics majors. It also includes the wrong perception about limited career options for physics majors, while nearly 95% of physics graduates are working for government, industry, business, and startups. One may question whether physics teaching has evolved adequately address

the needs of the innovation ecosystem. This has motivated us to develop physics modules, starting with introductory physics courses, to highlight the social impact of physics, in order to ignite the passion for physics. Efforts of Physics Innovation and Entrepreneurship (PIE), including the PIPELINE Network, support the goals of the “Phys21: Revamp Undergraduate Physics”, which was developed by APS and AAPT. The PIE education efforts also provide greater awareness and recognition for alternative physics career paths and options that resonates with the needs of a growing population of entrepreneurially-minded college-age students.

Bahram Roughani received the Ph.D. degree in Physics from University of Cincinnati in 1988. He served as a Postdoctoral Research Associate during 1988-91 with the University of South Florida in Tampa, FL.  His area of research is experimental condensed matter physics with emphasis on optical spectroscopy and electron microscopy of electronic materials. As  a faculty, he helped establishing the Applied Physics program at Kettering University in 1995, and led the Physics program during 2002-13, when he guided efforts in establishing the department of Physics, and the launch of an Engineering Physics degree in 2007.  As Founding Department Head, of Physics, he led efforts in establishing the very first ABET accredited Applied Physics program in the nation, with the Physics department’s achievement were recognized by APS based on the “Improving Undergraduate Physics Education Award” in 2012. He has been serving as the founding Associate Dean for the Natural and Applied Sciences at Loyola University Maryland since 2013, leading Math, Sciences, engineering, pre-health, and interdisciplinary science programs. He has achieved leadership role in fostering Physics Innovation and Entrepreneurship (PIE) efforts, including collaboration with the APS on the NSF supported project, the PIPELINE Network, organizing conference sessions during APS conferences, developing and disseminating PIE related curriculum materials, and conducting PIE related workshops during APS and AAPT national meetings.

The Group-IV Approach to Silicon Photonics 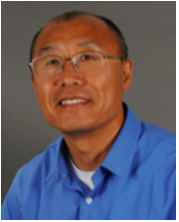 Silicon-based photonic devices such as emitters and detectors have long been desired owing to the possibility of monolithic integration of photonics with high-speed Si electronics and the aspiration of broadening the reach of Si technology by expanding its functionalities well beyond electronics. To overcome the intrinsic problem of bandgap indirectness in the group-IV semiconductors of Si, Ge, and SiGe alloys, a new group-IV material platform silicon-germanium-tin alloy (SiGeSn) has been investigated, featuring compatibility with current CMOS process, capability of monolithic integration on Si, and the tunable bandgap allowing the optoelectronic devices operation covers broad wavelength in near- and mid-infrared ranges.  For the past decade, plenty of promising results have been reported, such as GeSn lasers based on direct bandgap GeSn alloys, GeSn light emitting diodes (LEDs) and detectors operating in 2~3 µm. With tremendous novel electrical, optical, and mechanical properties, the newly developed GeSn devices could dramatically change the landscape of future microelectronics and photonics. In this plenary talk, I will present the latest development in photonic devices based on such a group-IV material system including infrared photodetectors, focal plane arrays, light emitting diodes, and optically pumped lasers. In addition, I will also talk about a more futuristic approach with the SiGeSn system for the development of THz quantum cascade lasers that can be potentially integrated on Si substrate.

Greg Sun received his Ph.D. in Electrical Engineering from Johns Hopkins University in 1993. Since then, he joined the faculty at the University of Massachusetts Boston where he is currently a professor and the founding Chair of the Engineering Department. His research interests are in semiconductor optoelectronics, quantum structures, silicon photonics, and nano-photonics. He has published over 150 papers in refereed journals and book chapters, delivered over 150 invited and contributed conference talks, and given over 50 seminars and colloquia. His work has been cited over 5500 times with H-index 43. He has held several visiting professor positions at National Taiwan University and Academia Sinica in Taiwan. He has served on various conference and symposium committees, as a guest editor for Optics Express, ACS Photonics and Journal of Physics D. He is now an associate editor for Journal of Lightwave Technology. 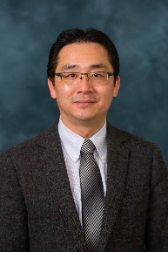 Photoacoustic imaging (PAI), also referred to as optoacoustic imaging, is an emerging biomedical imaging technology that is noninvasive, nonionizing, with high sensitivity, satisfactory imaging depth and good temporal and spatial resolution. Like conventional optical imaging, PAI presents the optical contrast which is highly sensitive to molecular conformation and biochemical contents of tissues and can aid in describing tissue metabolic and hemodynamic changes. Unlike conventional optical imaging, the spatial resolution of PAI is not limited by the strong light diffusion but instead determined by the measurement of light-generated ultrasonic signals. As a result, the resolution of PAI is parallel to high-frequency ultrasonography.

At the University of Michigan, School of Medicine, our research has been focused on clinical applications of PAI, including arthritis, cancer, liver conditions, Crohn’s disease, and eye diseases.  In this talk, I will introduce some of our recently development of PAI technologies, including 1) development of point-of-care PAI system for human inflammatory arthritis, and 2) development of quantitative PAI for evaluating histological microfeatures and microenvironment of cancer. I will also present our recent development of a photoacoustic based anti-vascular technology named photo-mediated ultrasound therapy (PUT). Using a combination of a low intensity laser concurrently with ultrasound, PUT can noninvasively remove microvessels without damaging surrounding biological tissue, and shows potential to the treatment of a variety of diseases associated with neoangiogenesis, such as age-related macular degeneration and diabetic retinopathy, as well as port-wine stain and cancer.

Dr. Xueding Wang is a Professor at the Department of Biomedical Engineering, University of Michigan, holding an adjunct Professor position at the Department of Radiology.  Before working as an independent principal investigator, Dr. Wang received his Ph.D. from Dr. Lihong Wang’s lab at the Dwight Look College of Engineering at Texas A&M University, and then finished postdoctoral training at the University of Michigan School of Medicine under the guidance of Prof. Paul Carson.  Dr. Wang has extensive experience in optical and ultrasound imaging and treatment system development and adaptation of novel diagnostic and therapeutic modalities to preclinical and clinical settings. Sponsored by NIH, NSF, DoD and other funding agencies, his research has led to over 110+ peer-reviewed publications.  At the University of Michigan Medical School, a major part of his research is focused on clinical applications of photoacoustic imaging and therapy, including those involving arthritis, prostate cancer, liver conditions, breast cancer, Crohn’s disease, and eye conditions. Dr. Wang is the recipient of the Sontag Foundation Fellow of the Arthritis National Research Foundation in 2005, and the Distinguished Investigator Award of the Academy of Radiology Research in 2013. He is also sitting on the editorial boards of scientific journals including Photoacoustics, Journal of Biomedical Optics, Medical Physics, and Ultrasonic Imaging, and being the steering committee member of the Journal of Lightwave Technology.